Tough, tougher, toughest: with the addition of the last seven explosive acts, the 5th edition of the Rotterdam festival ScumBash is complete. Also, Peter Pan Speedrock (NL), Born From Pain (NL), Discipline (NL), Cenobites (Rotterdam), Mindwar (BE), Skroetbalg (NL) and The Shivvies (Rotterdam) will come to shake things up in the awesome RDM Onderzeeboodloods on Saturday, February 4, 2023, during one day of pure goddamn rock ‘n’ roll.

With 21 bands on several stages this day of pure goddamn Rock ‘n’ Roll is bound to become a glorious gathering of friends, freaks and diehard fanatics. The early bird tickets are sold out already and a big chunk of regular tickets are gone as well, so better to get ‘em sooner rather than later.

Regular Tickets cost €49 and can be purchased at www.scumbash.nl.

Inspired by Speedfest (Peter Pan Speedrock’s annual party in Eindhoven’s Klokgebouw, which now goes by the name Helldorado), the men from Rotterdam’s Schorem Barbier decided in 2013 to also organize a festival of their own that would match the look and feel of their own internationally celebrated (and worldwide frequently copied) barbershop in the Dutch harbor city, which occupies its own unique place in the festival world. The slogan “one day of pure goddamn rock ‘n’ roll” fully covers the load.

Not only decent people come to ScumBash, especially lovers of psychobilly, punk and garage rock, hardcore, surf, ska, metal, outlaw country, roots and related music styles. In other words: party animals with a Rock ‘n’ Roll lifestyle. The successful combination of the venue, the atmospheric decor (including a vibrant lifestyle area) and a rock-solid program makes this authentic event unique.

The first three editions in 2014, 2015 and 2016 were held in the striking Van Nellefabriek, one of the Netherlands’ premier industrial monuments. For the fourth edition in 2017, ScumBash is moving to the rougher RDM Submarine Wharf in the Rotterdam harbor, which matches the festival’s tough and atmospheric character one-on-one. 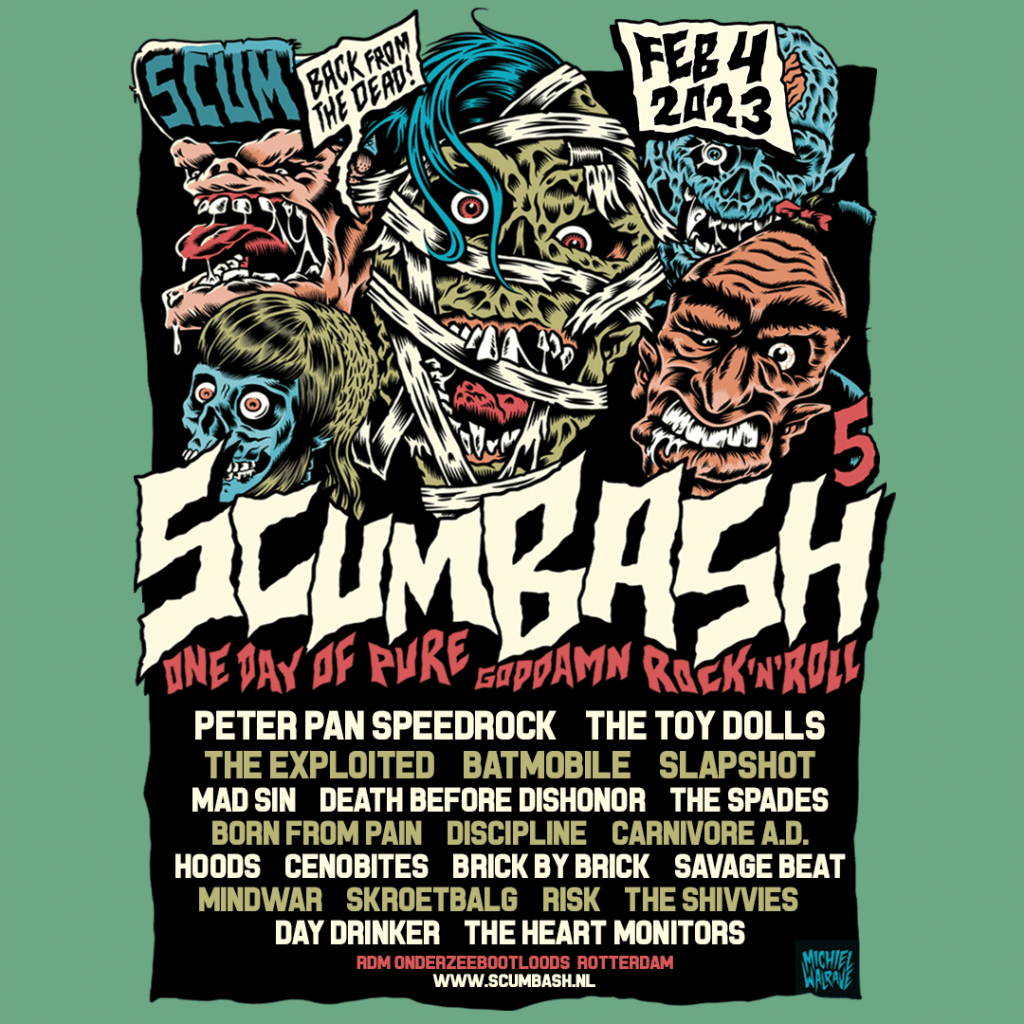 ScumBash Express is back!
Hop on the shuttle bus and going’ to the Bash and back is a piece of cake. Bus departures from Rotterdam Central Station, “stop GG” at Conradstraat, which is also the return location after the event.

The bus tickets are two-way tickets. Returning from ScumBash to Rotterdam Central can be done at any time between 20:00 and 01:00

TICKETS
Grab your tickets at www.scumbash.nl.
Tickets already purchased for 2021 are still valid for the upcoming 2023 edition.